The housing market has been defying forecasts during the COVID-19 pandemic. Initially, home sales nose-dived for three consecutive months during state shutdowns. But by June, a “remarkable housing recovery” took hold, and real estate bounced back with a vengeance, Lawrence Yun, chief economist for the National Association of REALTORS®, said Wednesday during NAR’s virtual 2020 Leadership Summit.

One-third of REALTORS® say they’re busier this summer than they were a year ago, according to a recent NAR survey. It’s a sign that even under the weight of compounding national crises—the pandemic, skyrocketing unemployment, racial inequality, and a recession—the housing market is likely to remain strong. The market is on the upswing of a “V-shaped recovery,” Yun said, with sales about 10% higher than a year ago. Yun made other observations about how the housing market is faring.

Inventory is 20% lower than a year ago, but buyer interest remains high, Yun said. New-home construction could alleviate shortages, but activity has fallen under historic averages for the past decade, he added. Some areas of the country saw construction halted during the initial stages of the coronavirus pandemic.

But builders are starting to make up for that lost time. Housing starts for single-family and multifamily construction jumped nearly 23% last month, the Commerce Department reported Tuesday. With limited housing supply, “there is intense buyer competition in the market,” Yun said, noting that the Western region of the U.S. is seeing the worst inventory shortages in the nation.

The Pipeline of Buyers Is Growing

Meanwhile, mortgage applications, an early gauge of homebuying activity, are up 27% compared to a year ago, the Mortgage Bankers Association reported Wednesday. “These reflect buyers who are in the pipeline and are about to hit the market,” Yun said. Contract signings also have surpassed year-ago levels, up 6.3% in June compared to the previous year, according to NAR’s Pending Home Sales Index. Record low mortgage rates—which have dipped below 3% for the first time ever—may be a motivating factor. They could go as low as 2.89% in the next month or two, Yun said.

While migration trends were toward urban centers before the pandemic, real estate thought leaders have predicted a suburban resurgence as home buyers seek more space for social distancing. Now the data is supporting that theory. Coronavirus and work-from-home flexibility is sparking the trend reversal, Yun said. More first-time home buyers and minorities have also been looking to the suburbs for affordability, he added. 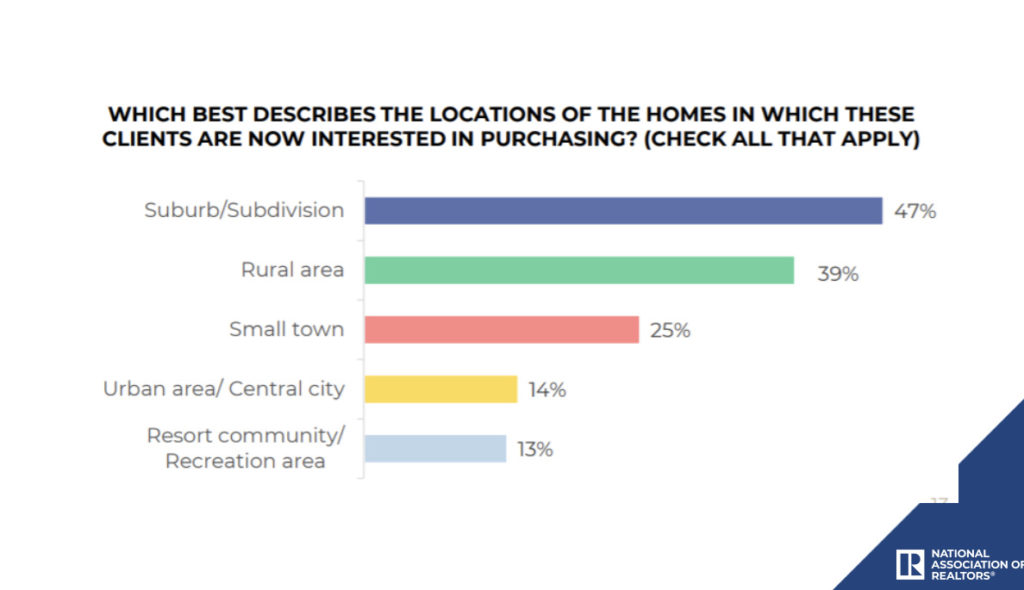 While jobs have climbed back somewhat from deep losses in the spring, employment remains 7.5% lower than a year ago, Yun said. Nevertheless, most homeowners and renters are keeping up with monthly payments. Eighty-eight percent of renters have been paying their rent on time compared to 90% a year ago, Yun noted. This is perhaps because, ironically, personal incomes are still rising.

Yun said the government’s massive stimulus bill, as well as extra unemployment benefits and aid in the form of small business loans, has helped Americans’ incomes remain elevated during the pandemic. However, growth in consumer spending has plummeted as more Americans opt to save. “There is potential for pent-up spending as the economy reopens more,” Yun said.

Can Housing Keep Up the Pace?

Yun predicted the housing market will remain robust in the months ahead, saying home prices will grow 3% to 5% by the end of 2020. Next year, he predicted, home prices may increase 2% to 3%. Due to the spring dip, home sales likely will end the year down 2% to 4% compared to the previous year. But that’s “remarkable,” Yun said, considering the toll of the pandemic. Home sales will ramp up again next year, Yun said, increasing between 8% to 12%.


Between Two Brokers Podcast: The Duchess of Charleston